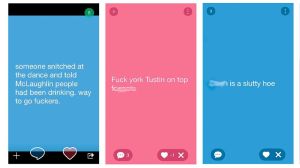 It’s a teenager’s worst nightmare: naked selfies sent to another teen in an act of foolish confidence end up online, where they are openly displayed for their classmates’ intrigue and ridicule.

This happened to a few students at Monterey High School over the winter. Classmates say the betrayal of having pictures posted they thought would be kept private by the recipient kept some kids from school for a few days.

When they finally returned, their humiliation was palpable.

Posting nude photos of underage people is a crime (even if the one doing the posting is also underage), and while the Monterey Police Department has investigated the incidents, there are few leads that could result in an arrest.